How robots will change our lives in the next few years

Take the word "robot," for example. What kinds of pictures come to mind for you? Have you ever imagined a futuristic metal guy navigating a spaceship in your head? Perhaps when you picture the future, you see a dystopian society ruled by robots in which humans are forced to work for robots as enslaved people. You might also see a car factory where robots or robot-like devices are used to construct automobiles. 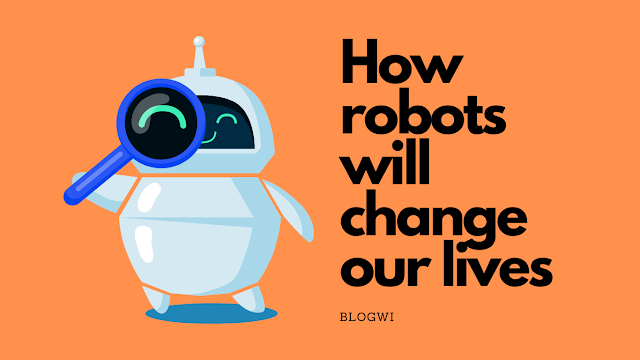 It makes no difference what kind of thoughts you have regarding robots. They will not be going anywhere anytime soon. That much is certain. To our great relief, the primary function of robots will not be to seize control of governmental institutions but rather to carry out tedious or hazardous tasks. Let's look at robotics, beginning with the fundamentals of what it is and how to classify it, moving on to the role that artificial intelligence plays in the field, and finally moving on to its potential future applications and how it may alter our day-to-day lives.

In a few words, describe Robotics:

The study of robots and their creation, design, construction, operation, application, and utilization are the primary focuses of the engineering discipline known as robotics. However, once we delve a little deeper, we discover that robots are self-operating machines that can be programmed to carry out various tasks that, in other circumstances, would require the participation of a human.

Robots do not need to appear human to provide additional context, although some do. The evidence can be seen by looking at pictures of automobile manufacturing facilities. Robots designed to resemble humans are frequently referred to as androids. Engineers often attempt to give their creations a human appearance to make people feel more at ease around robots. However, this is not always the case. Some people, particularly those with a more humanoid appearance, find robots unsettling. These people are particularly affected by this.

Because of their adaptability, robots can assume various shapes and perform a wide range of functions. The following is a selection of examples of common types of robots:

The field of medicine is increasingly making use of robots for a variety of tasks, some of which include but are not limited to assisting surgeons, helping patients recover from anesthesia, improving patients' mobility through physical therapy, navigating and delivering medications and other essential hospital supplies, and facilitating recovery from anesthesia. Even in the ongoing fight against the epidemic, healthcare robots have been responsible for carrying out tasks such as checking swabs, creating respirators, and filling and sealing vials.

Living circumstances: the presence of a Roomba is the most reliable sign that a robot is present in a household. Even though they can still do that, house robots now also mow lawns and assist devices such as Alexa.

For instance, industrial use was the first application for the robots that are now commonplace in automobile production lines. Robots are used for various tasks in the manufacturing industry, including arc welding, material handling, steel cutting, and food packaging, to name a few.

Everyone who shops on the internet looks forward to the speedy delivery of their purchases. Consequently, businesses regularly utilize robots to carry out warehousing-related tasks such as stocking shelves, retrieving items, and even making local deliveries.

Investigations on Mars have been carried out by robots such as the Sojourner and the Perseverance. Spacecraft such as Voyager and Cassini, as well as the Hubble telescope, are examples of robots.

Robots in the armed forces are capable of performing dangerous tasks, such as those needed in modern warfare. Because of this, the military now has access to various robots designed to carry out complex combat-related tasks. For example, the Centaur is a mine/IED-hunting and disposal robot; the MUTT is a robot that accompanies soldiers and carries their equipment; and the SAFFiR is a robot that extinguishes fires on naval vessels. These are just some of the robots currently used by the military.

When discussing modes of transportation, only three words are necessary to describe autonomous vehicles:

Both Pros and Cons of Employing Robots in the Workplace

Like all other technological advancement forms, robots have benefits and drawbacks. This article discusses the advantages and disadvantages of robots and the current and future state of robotics.

These individuals have jobs that put them in precarious situations where they could be injured: It is not cost-effective to send in human beings to perform the same task that a robot can do. Just consider how much more effective it would be if a robot put out a fire or maintained the core of a nuclear reactor. Just think about it.

In the long run, they save money: Because robots never get sick or require breaks, there is no reason to provide them with benefits such as paid vacation, dental and vision care, or life insurance. In addition, robots do not require paid time off.

This is because they increase output in various ways: In contrast to humans, robots can be programmed to repeat the same actions repeatedly, but the human brain cannot. Because of this, many industries have begun employing robots to carry out mundane and repetitive tasks. This frees up more time for humans to devote to creative problem-solving and developing skills.

They ensure greater adherence to established quality control standards: Employees who are required to execute the same tasks repeatedly may experience a loss of focus, known as vigilance decrement. This loss of stress can be detrimental to the success of an organization. People who aren't entirely focused on a mission have a greater propensity to make errors or experience unfavorable occurrences, such as being in a car accident. It has been demonstrated that robots can carry out repetitive tasks without their performance suffering due to boredom.

An initial investment of a significant amount is necessary: The implementation of robots is not without substantial financial and operational risks. Although, in the long run, most factories can make their money back, it can be pretty expensive in the short term. On the other hand, this is a typical obstacle to adopting cutting-edge technology, such as when establishing a wireless connection or migrating data to the cloud. This can be a frustrating experience.

Possible losses of employment result from the following factors: Robots have taken over many previously human jobs, such as working on assembly lines in factories. Whenever the business world embraces new revolutionary technology, it will inevitably result in losing several positions. The increased demand for human support staff is the fourth disadvantage of introducing new technologies like robots, and it often follows in their footsteps after introducing new technologies.

They require businesses to staff their operations with knowledgeable support personnel: This disadvantage is fantastic for individuals looking for work but terrible for companies that are cost conscious. There is a demand for experts in robot programming, operation, and maintenance. The good news for people looking for work is that businesses may be hesitant to use robot workers due to the high cost of hiring specialists. Job seekers can rejoice.

The Robotics of the Future: What Specific Role Does AI Play in the Field of Robotics?

AI has the potential to improve both the quantity and quality of interactions between humans and robots, as well as the opportunities for collaboration. For example, co-bots, or robots designed to work alongside people, are already commonplace in the manufacturing sector, where they assist in tasks such as quality control and product assembly.

The development of new technologies in artificial intelligence has enabled robots to simulate human behavior. Consequently, the incorporation of robots into the workplace that exhibits human-like behavior and cognition is made more accessible, and the level of productivity achieved by robots exceeds that of human employees.

Creators of robots often employ AI to endow their machines with advanced features such as:

Computer vision enables robots to recognize and give names to the things they see, conduct in-depth analyses of those things, and figure out how to navigate their environments or avoid potential dangers.

Thanks to artificial intelligence programs that train their fine motor skills, robots can pick up and hold objects without breaking them. Manipulation is one of these programs.

Robots are gaining an increasing capacity to function without human supervision through motion control and navigation advancements. AI has enabled robots to perform tasks such as analyzing their surroundings and navigating independently. This ability extends into the realm of digital media, specifically computer programs. Robot software processes can more easily avoid bottlenecks and exceptions with artificial intelligence (AI) assistance.

AI and ML enable robots to perceive their environments, improve their ability to recognize patterns, and make sense of data using NLP and RL. Because of these enhancements, the robot now has increased autonomy and requires less human assistance.

A Remark Concerning Robot Software Software robots can take many forms, but some examples include web crawlers and chatbots. Unfortunately, these robots cannot be classified as "real" robots due to their lack of physical characteristics.

You mustn't combine this technology with the robotic software pre-installed on a robot and directs its behavior. The two are frequently intertwined, however, because, in both instances, the software makes it possible for the entity (either the robot or the computer program) to function independently.

What Expectations Should We Have Regarding Robotics and Robots in the Future?

Robots will evolve into cognitive partners shortly due to AI and sensor technology advances. The field of robotics stands to gain significantly from the developments that have taken place and the progress being made in related areas.

There will be a gradual shift toward integrating increasingly complex robots into society alongside humans. However, those with a pessimistic outlook on the future are incorrect in their assumption that more advanced robots will eventually replace humans in the workforce. Industries come and go, and some become obsolete due to the introduction of new technologies. This, in turn, gives rise to developing new academic subfields and employment opportunities.

In the same way, robots function. For example, the number of people employed to weld the frames of automobiles may decrease soon. Despite this, there will likely be a rise in the demand for qualified technicians to operate, monitor, and repair these robots. As a result, employees could frequently benefit from essential in-house training and upskilling, which would provide them with abilities that could be used in professions and businesses beyond robotics, such as programming, maintenance, and others. This would give the company with a competitive advantage.

How Robots Will Make Future Changes to Our World Robots will boost economic growth and productivity worldwide, creating a wide variety of new job opportunities for people in every region. Concerns remain regarding the possibility of significant job losses, with projections ranging from the elimination of 20 million industrial jobs by 2030 to the automation of 30 percent of all jobs.

On the other hand, given the dependability and precision of robots, we may soon see them taking over more severe and unnecessary forms of manual labor. This will allow for transportation and healthcare improvements and more personal growth opportunities for people. But as things currently stand, the only way to find out how things play out is to wait.

How to get a high paying job at Google

How To Install Latest Powerful Anti Adblock Script In Blogger?

Most Recommended Technology Blogs in 2022